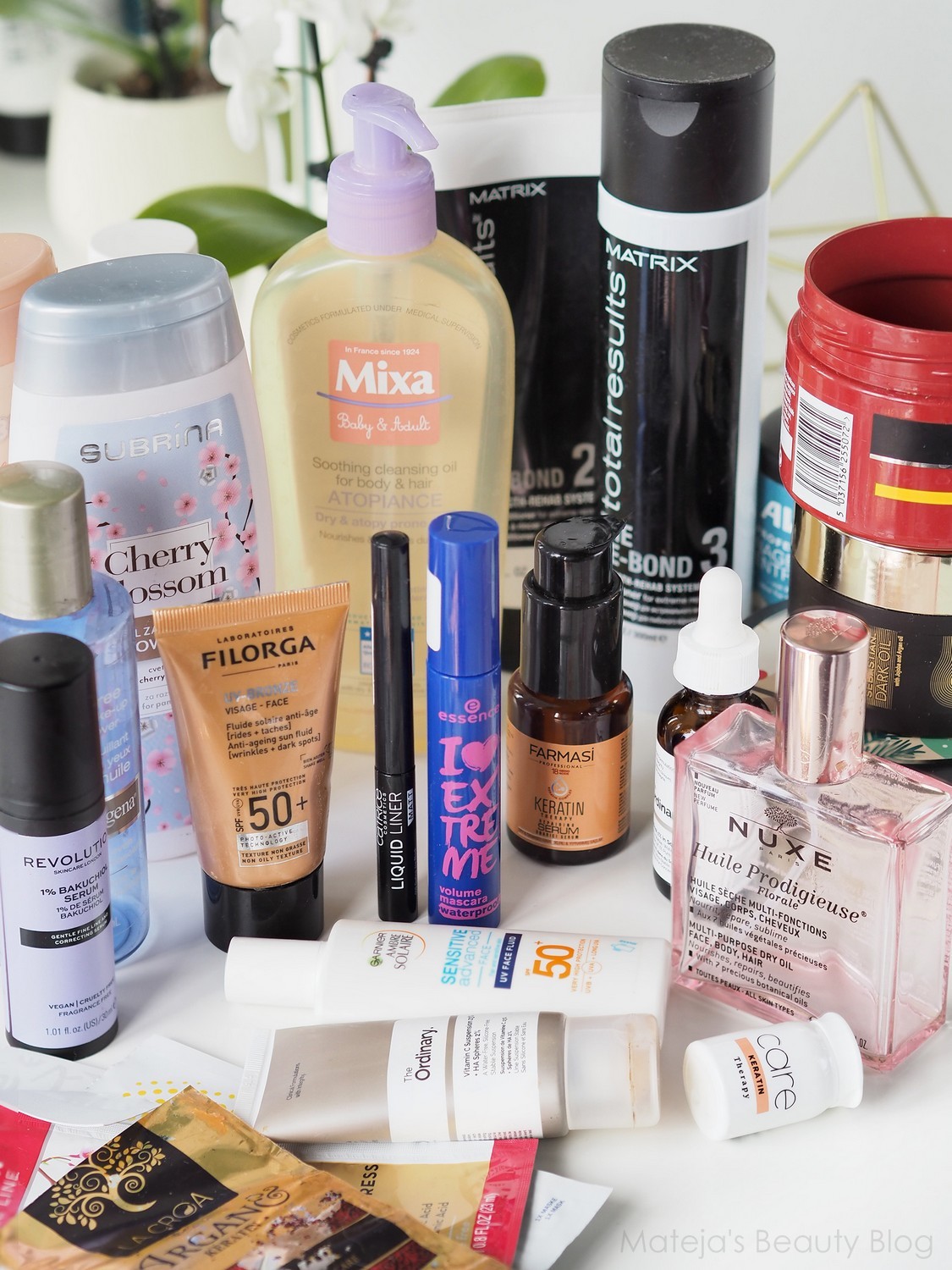 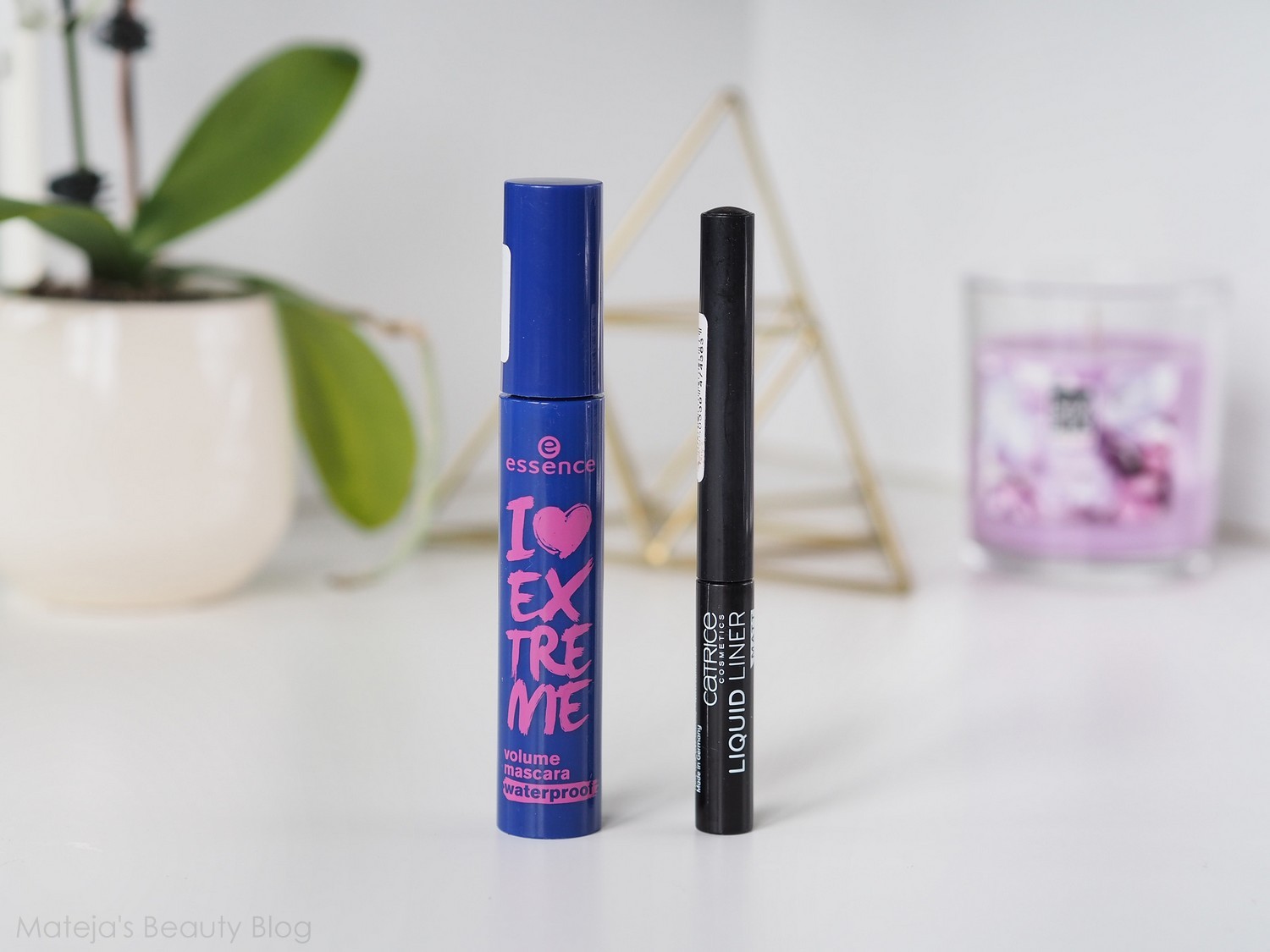 My all-time favourite mascara. It holds my lashes curled, has a good multiplying effect, lengthens and adds volume. I’m not a big fan of the big brush, but I got used to it.

My usual eyeliner and the best I’ve found so far. It’s intensely black, matte, long-lasting and has a nice applicator. 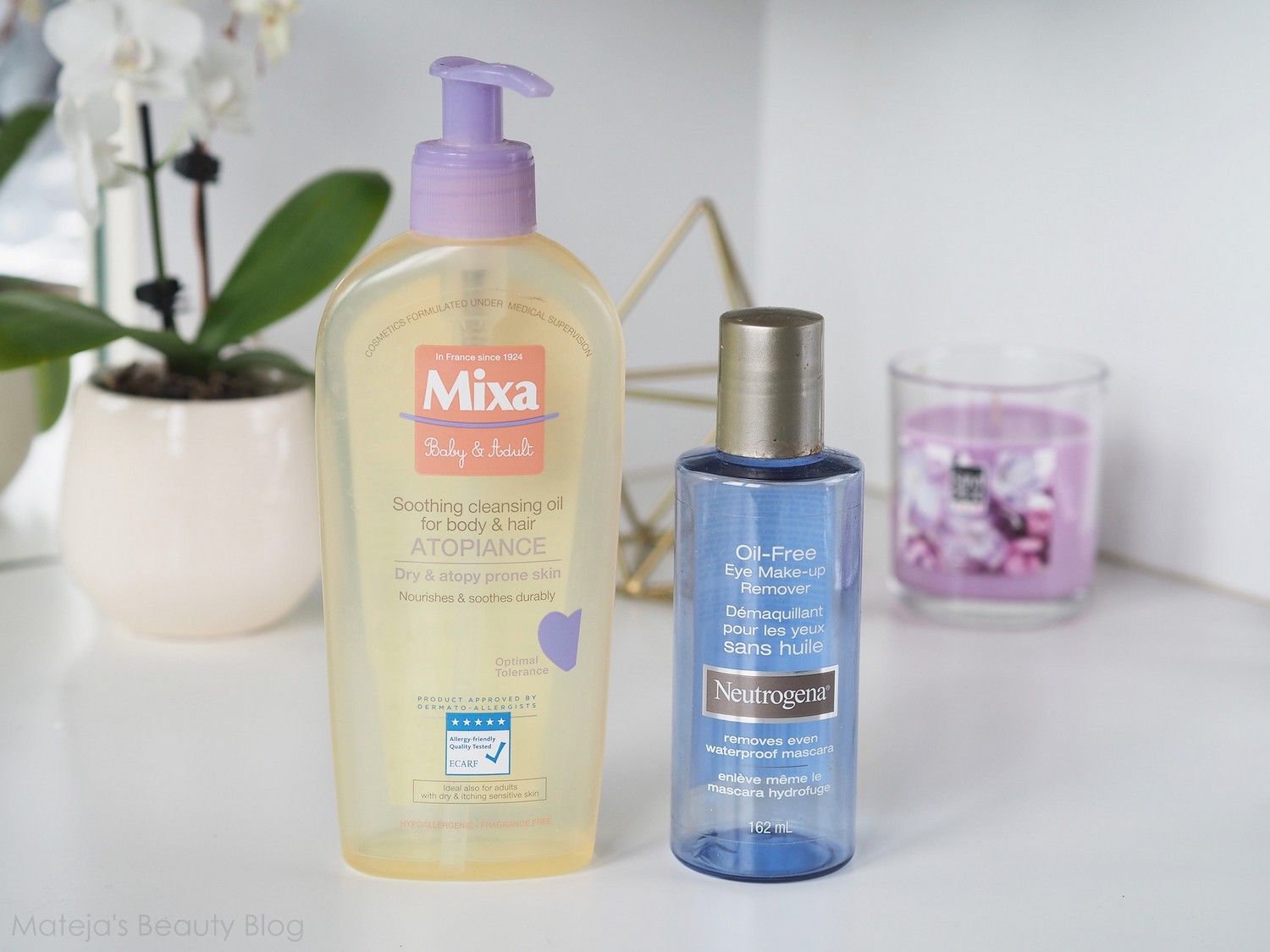 Though I was initially very disappointed it’s not an oil, as it’s just a regular cleansing gel, I like this as a second cleanser or individual cleanser when I’m makeup free. I used this both for cleansing my face and as a hand soap, but it’s a head-to-toe type of product. I love the convenient pump packaging, it’s gentle, doesn’t irritate the eyes, cleans well and has no odd scent.

I didn’t value this enough. It’s only after it was gone that I realised what treasure I had in my drawer. It’s possibly the most effective dual-phase remover I had, though it’s been a while since I had Maybelline, L’Oreal and Clarins, which were great too. This can remove the most stubborn waterproof mascara known to mankind – Catrice Glam & Doll Volume, which my current removers (useless Hoffer’s Ombia and Nivea) can’t do much against. I don’t know why at first I struggled with it removing waterproof formulas, but it’s really effective.

Repurchase: Yes, but it’s not sold here (mine was from Canada). Reading my old review, it’s possible L’Oreal’s is better, since it was the formula I had before this one. 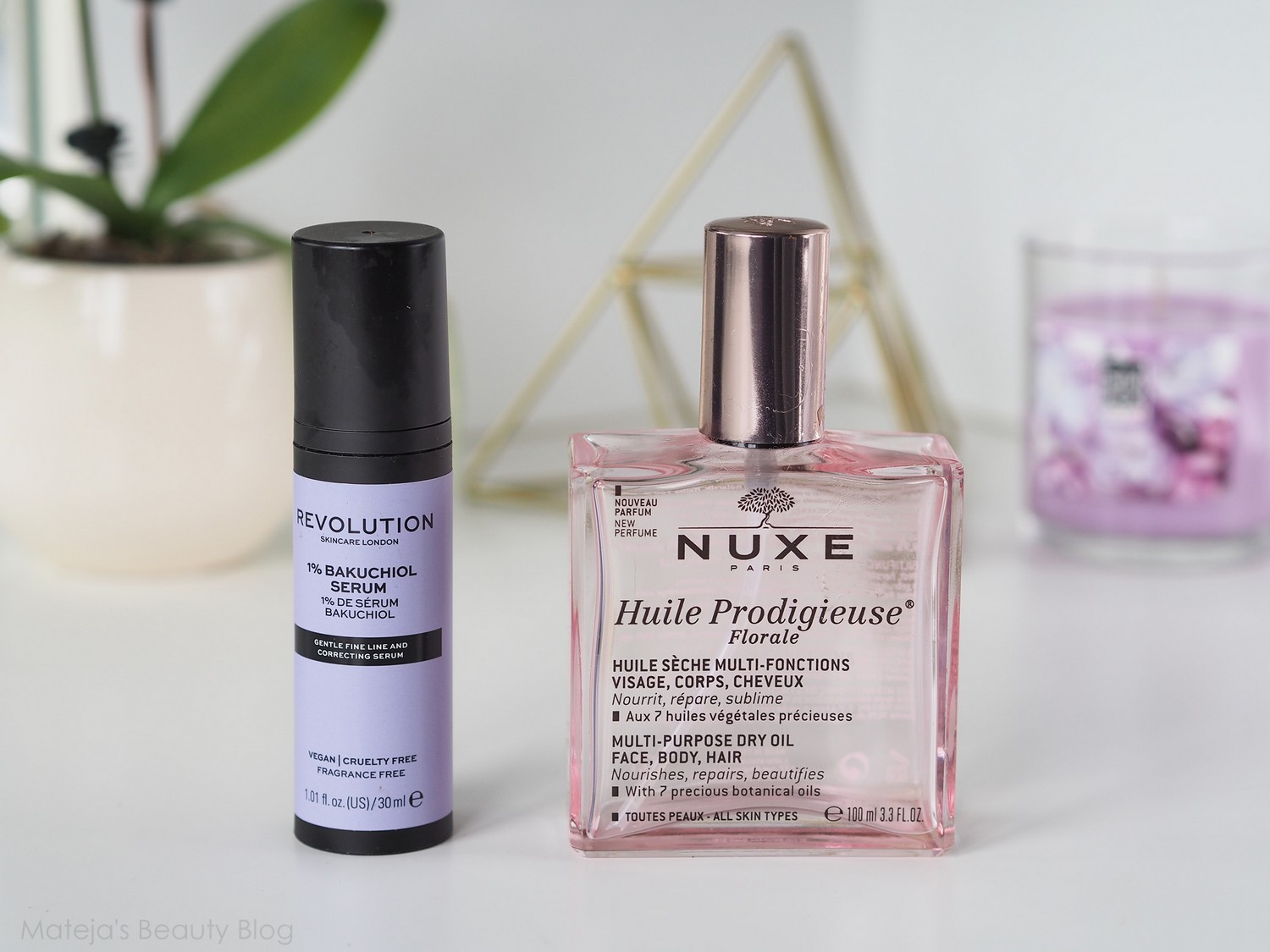 My first bakuchiol product. The latter is hailed as a gentle sort of version of vitamin A. It’s a lotion type of texture with a lavender tint and it’s ok for layering over, but sometimes it flaked off the skin when I applied oil over it. It didn’t break me out, but it just made my skin odd. When I was using this it lost its softness and it just didn’t feel right. I stopped using it for a long time, but it turned out my bottle only had a couple of uses left, so I used up most of it in that first period of use. In between that time I bought a Catrice’s bakuchiol product, which didn’t make my skin odd, so I blame the filler ingredients in this serum.

My regular face oil for about a decade now, though I used the original version before. Florale just has a different scent. It works well with my skin and it a product I can always rely on doing its job and never causing me any problems. It’s quite light for an oil and since it’s dry it doesn’t feel greasy forever on the skin. 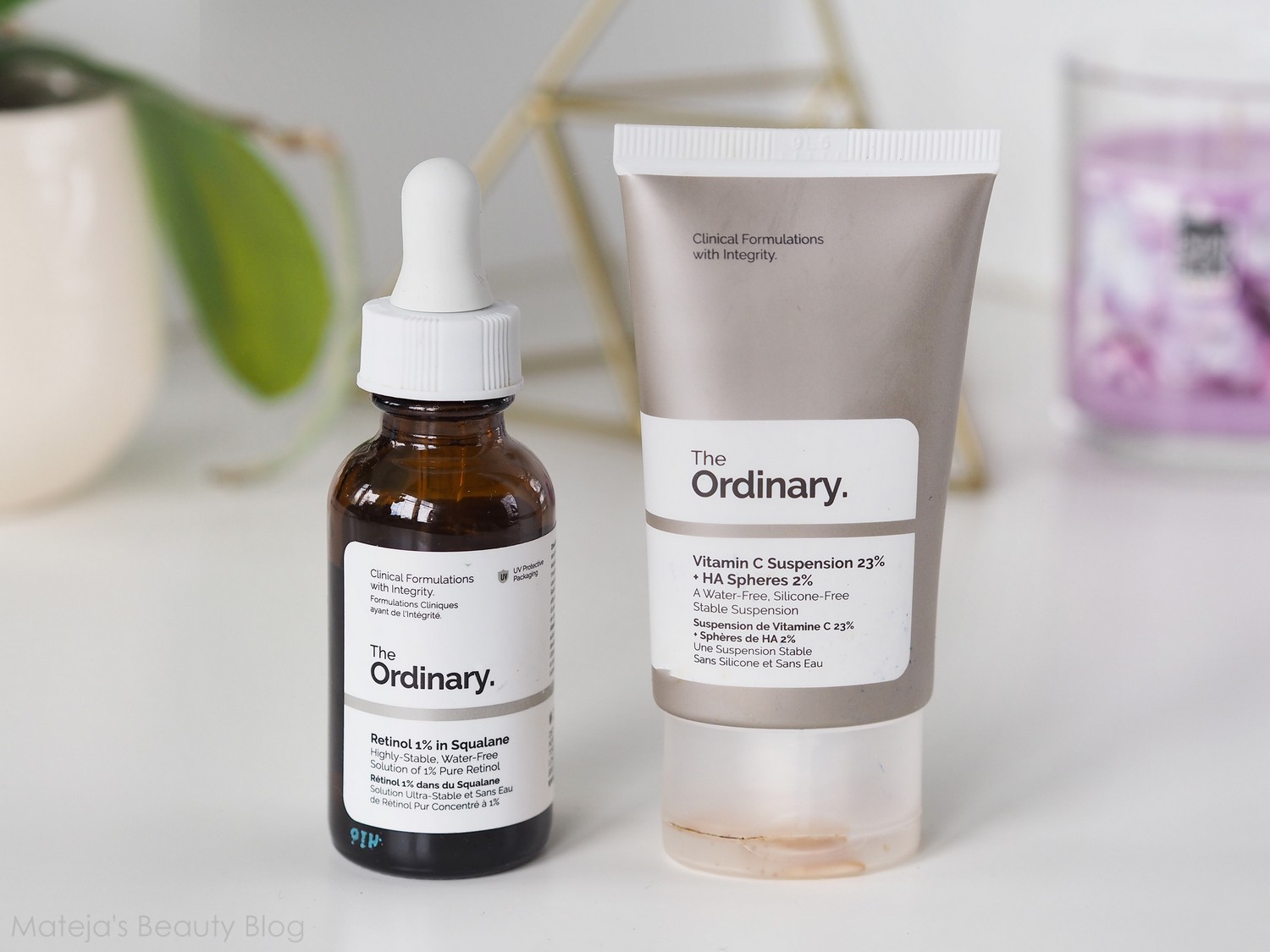 THE ORDINARY 1% Retinol in Squalane

Really not a fan of this. While I was able to heal my skin fairly quickly after the initial reaction (sensitive & super, super dry, flaky skin that was absorbing thick coats of Mixa Cica Cream in an hour), this turned my once beautiful, healthy skin into a mess. There wasn’t anything specific apart from some flaking, but all makeup looked so awful on my skin. And that went on for 6 months without ever seeing any positive effects. Then I stopped using it and used only my basic trusted skin care and I finally got my healthy-looking skin back.

While the texture isn’t as terrible as I expected based reviews, it’s far from a nice comfortable product like the rest of vitamin C stuff I’ve tried. It’s a medium thick kind of greasy cream with some powder particles (I was recently told those dissolve if you add some water). I only used it in my night routine because it’s not a product that can be worn during the day, so not something I could combine with a sunscreen. The finish it leaves is very shiny and it sits on the skin for a long time. There was some reaction for the first few days, but my skin quickly adjusted. However, despite using this regularly for months, there was no visible result and I find it an annoying product to use. I put in back in my drawer and started testing other vitamin C products, but now I’m officially chucking it out. 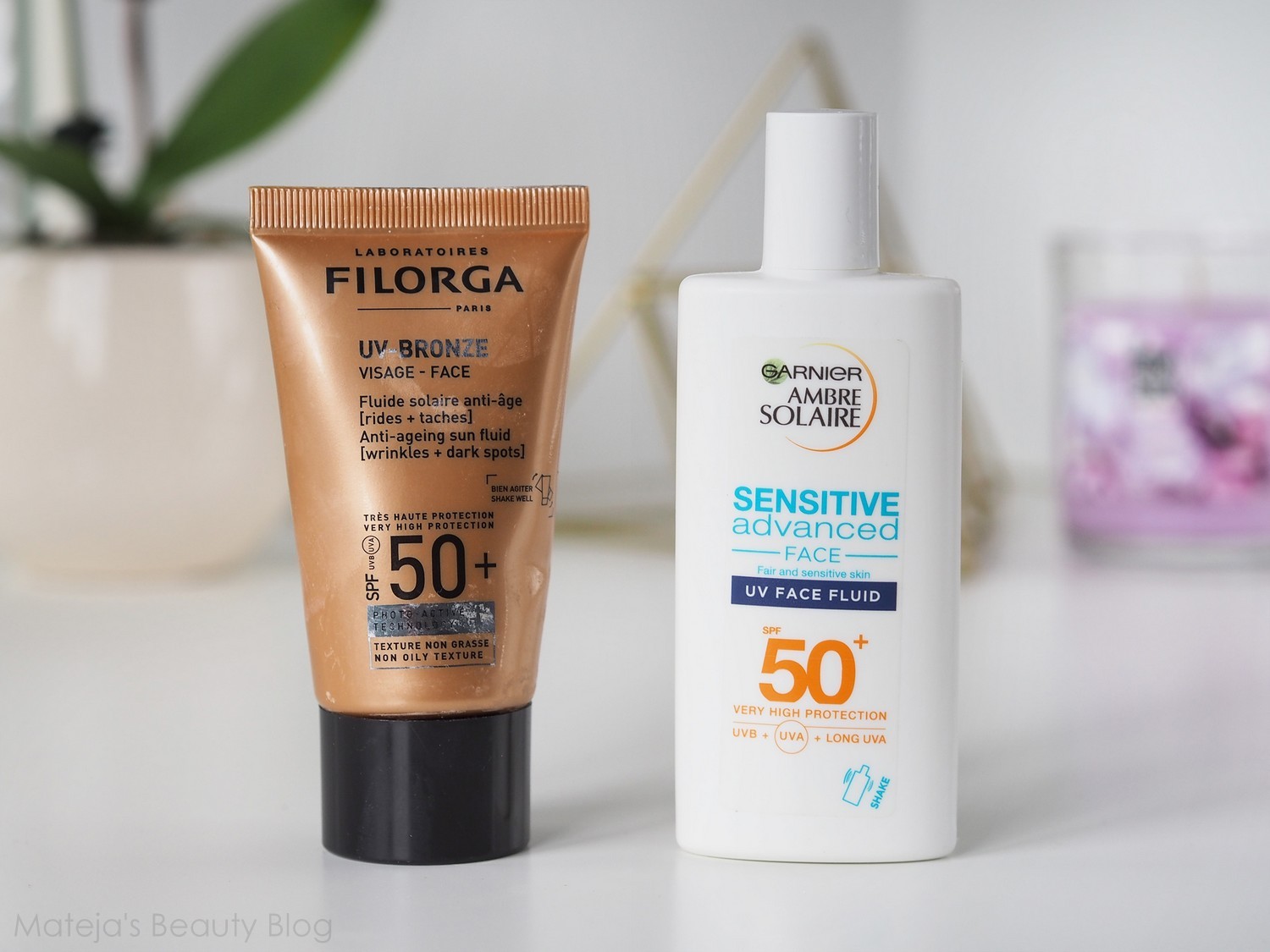 I really liked this and last year it was my most used SPF, instead of the Garnier Fluid one. The reason was a nicer ingredients list, since it hasn’t got alcohol, plus Garnier is lighter, so the latter was my “special occasions SPF” (like it’s “that” expensive to buy a new one, but I had a stash of stuff to use up). It’s a light lotion-cream texture that doesn’t feel greasy on my skin (it’s most similar to A’Pieu Pure Block Natural Daily Sun Cream SPF45+). It applies easily with no white cast or streaks and it has this wonderful honey-floral scent (also why I loved using this). Makeup goes over it with no problems, there no extra shine, though it’s not matte it’s just not much “sunscreen shiny” and it doesn’t irritate my eyes. This one has niacinamide and squalane.

One of my favourite sunscreens. It’s so light on the skin, not greasy, there no excessive sunscreen glow, it doesn’t burn when it gets in my eyes and it doesn’t pill. Texture is very liquid, so it’s easy to apply and even layer if you want, plus there’s no white cast. The only minus is the amount of alcohol. 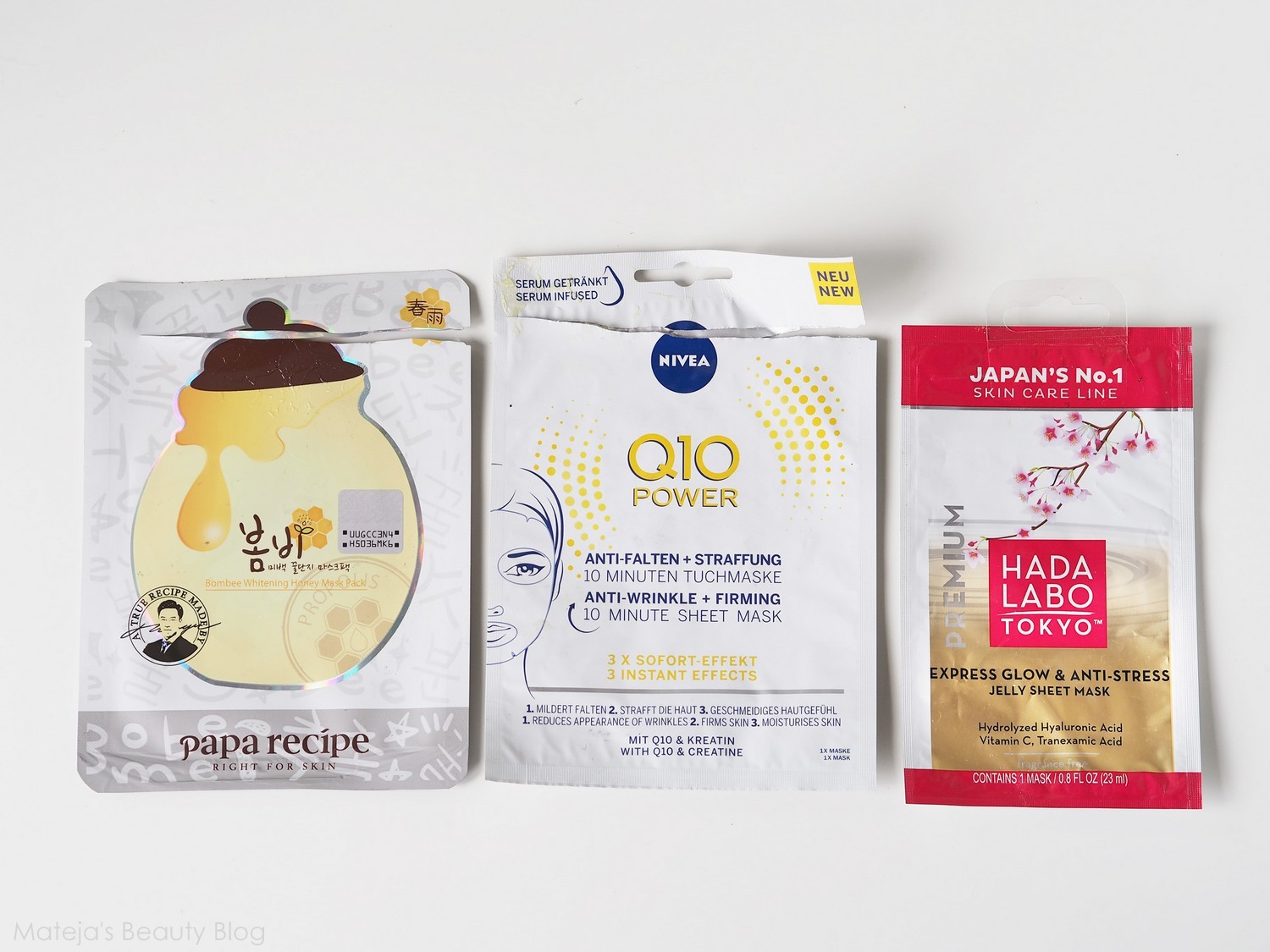 My favourite sheet mask. I had a whole pack of these and saved them obsessively because they are not easy to get, though I see they are now on Jolse. Sheet is thin, there’s plenty of honey smelling essence and it really makes my skin more even and brighter. It has tons honey extract and propolis.

I had this unopened for ages because I bought it at the same time as their Hyaluron Cellular Filler 10 Minute version, which was so terrible (such a stiff masks), so I didn’t want to try this one too. It’s actually a lot nicer than Hyaluron. The material is softer, though still thicker than most masks, but it was ok on the face. There was plenty of essence and it was a nice hydrating formula. It didn’t firm up the skin, but my skin felt nice the next day.

Repurchase: It’s not out of the question. I’m interested in their version with bakuchiol (Expert Lift Cellular).

This was expensive for a single-use treatment and I wasn’t terribly excited by the results. It has tranexamic acid as the first ingredient. The latter is this supposed superstar brightening ingredient. There’s also some vitamin C (Magnesium Ascorbyl Phosphate) and hyaluronic acid. Sheet is ok and there’s plenty of nice-feeling essence. In terms of effect – I saw nothing much. No extreme brightening or more even skin tone, just a well hydrated skin.

Repurchase: It’s too expensive. If it were cheaper I might consider giving it another chance. 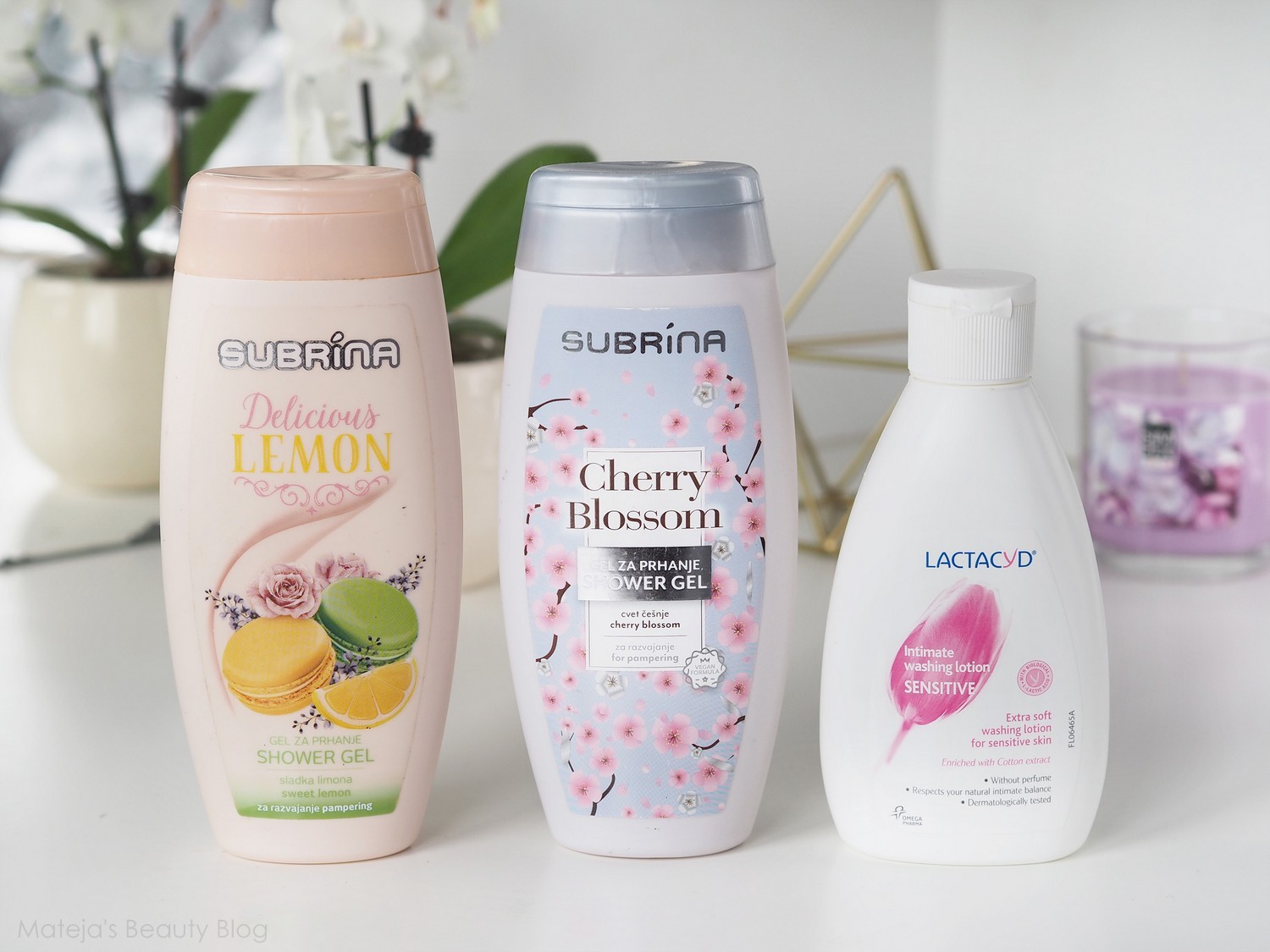 This is the old packaging and a discontinued scent, so kind of pointless to include it, but there are some old versions on click2chic.si. This one smelled like lemon squares.

I’ve used up so many bottles of this. Packaging is new, but scent is the same, a floral-powdery one.

The only brand I trust and when I strayed it backfired.

Repurchase: Done, but the new probiotic one. 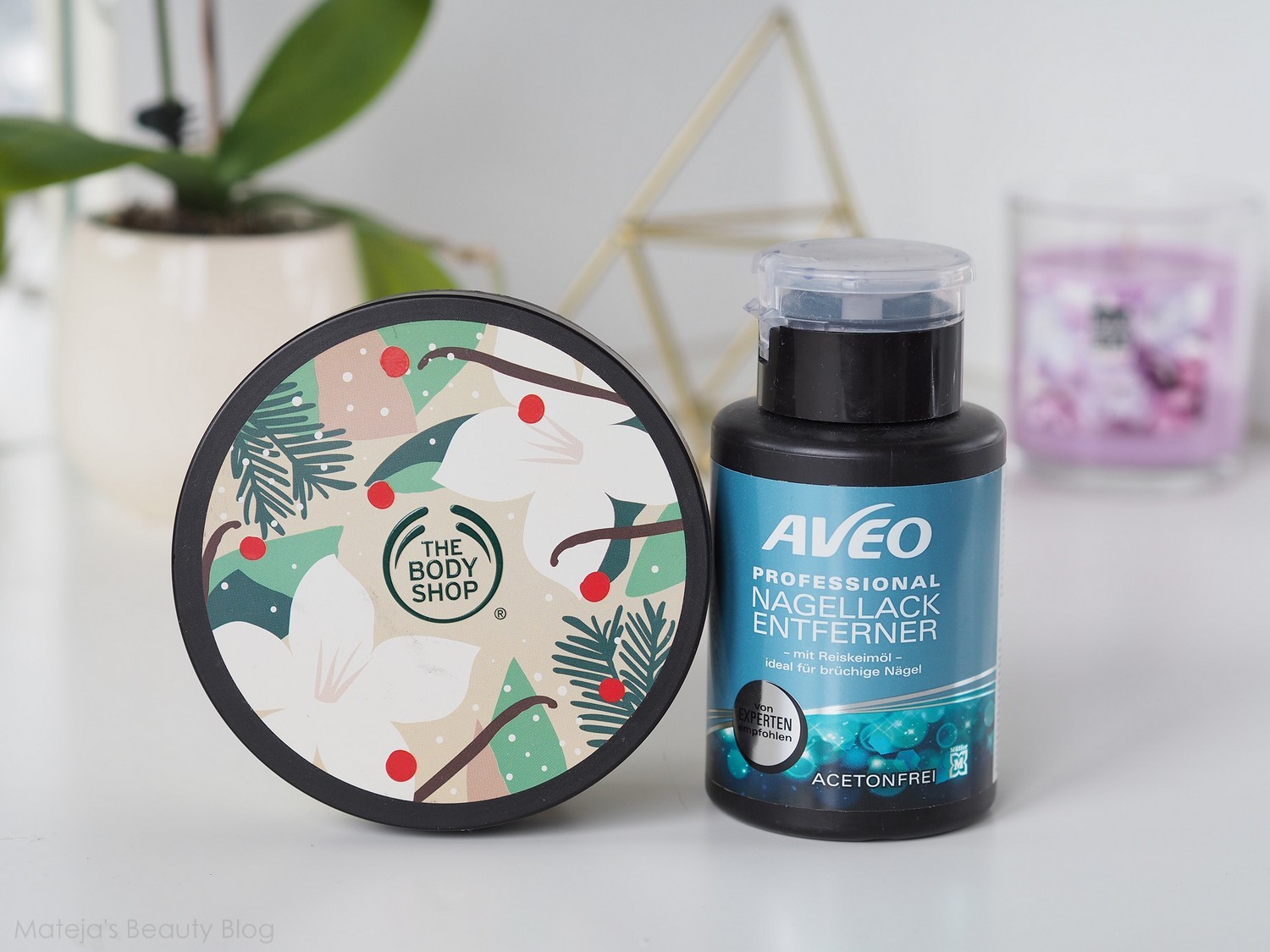 I always had at least one TBS body butter in my collection. This was my last one, so I need to get a new one. In terms of texture it was a typical TBS body butter, so rich and thick, lovely for dry skin. It doesn’t absorb fast, but I want that from a body moisturiser and I always use them before bed. The scent was bland to me, a basic vanilla. I used to adore Vineyard Peach the discontinued, so now I only really love the most neutral Shea version, though I haven’t tried them all.

Repurchase: Other scent, but yes.

A good effective remover with a pump packaging. I couldn’t get to a drugstore, so I grabbed a Lidl one and it’s much weaker than this. 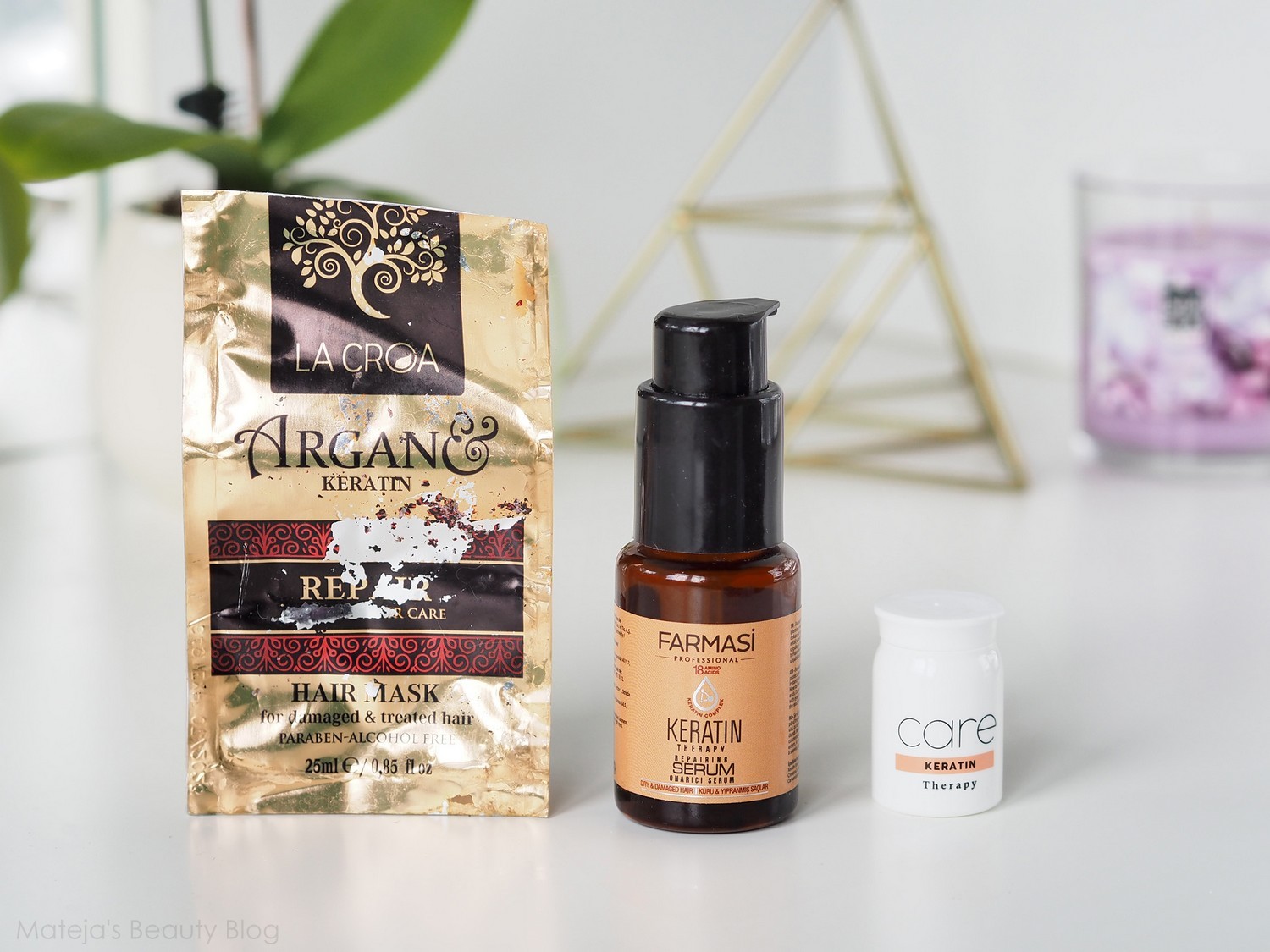 A great rich and thick formula for very dry hair. It’s not easy to get it all over my long hair, but I manage to use just one bag at a time and my hair feels nicely nourished after use. There’s a pot version, but I haven’t seen it in person yet. I think it may just be online.

This was so light and the bottle so small, I didn’t have it for that many uses. I used it mostly as a heat protectant, since as a tamer I have to use 5+ pumps and it still might not be enough for my hair for look smooth and more polished. It’s more suited for thin hair.

Repurchase: Probably not. It’s not bad and I liked it as a heat protectant, but the bottle is so small.

I used this with the Keratin mask, as this is just a liquid that enhances the effect of that formula. In theory this should be great on my hair and I’ve seen some brilliant results with this combination, but it leaves my hair stiff. That means that’s the combination isn’t hydrating enough for my hair, so it doesn’t counteract the protein care effect. Basically it’s like I use Joico K-Pack without the Intense Hydrator. I’ve tried it with my most hydrating conditioner (Cantu Shea Butter) and my hair still didn’t feel soft after use. Still if you colour your hair, bleach or use heat styling a lot, it might be worth a try.

Repurchase: I still have 4 more vials. 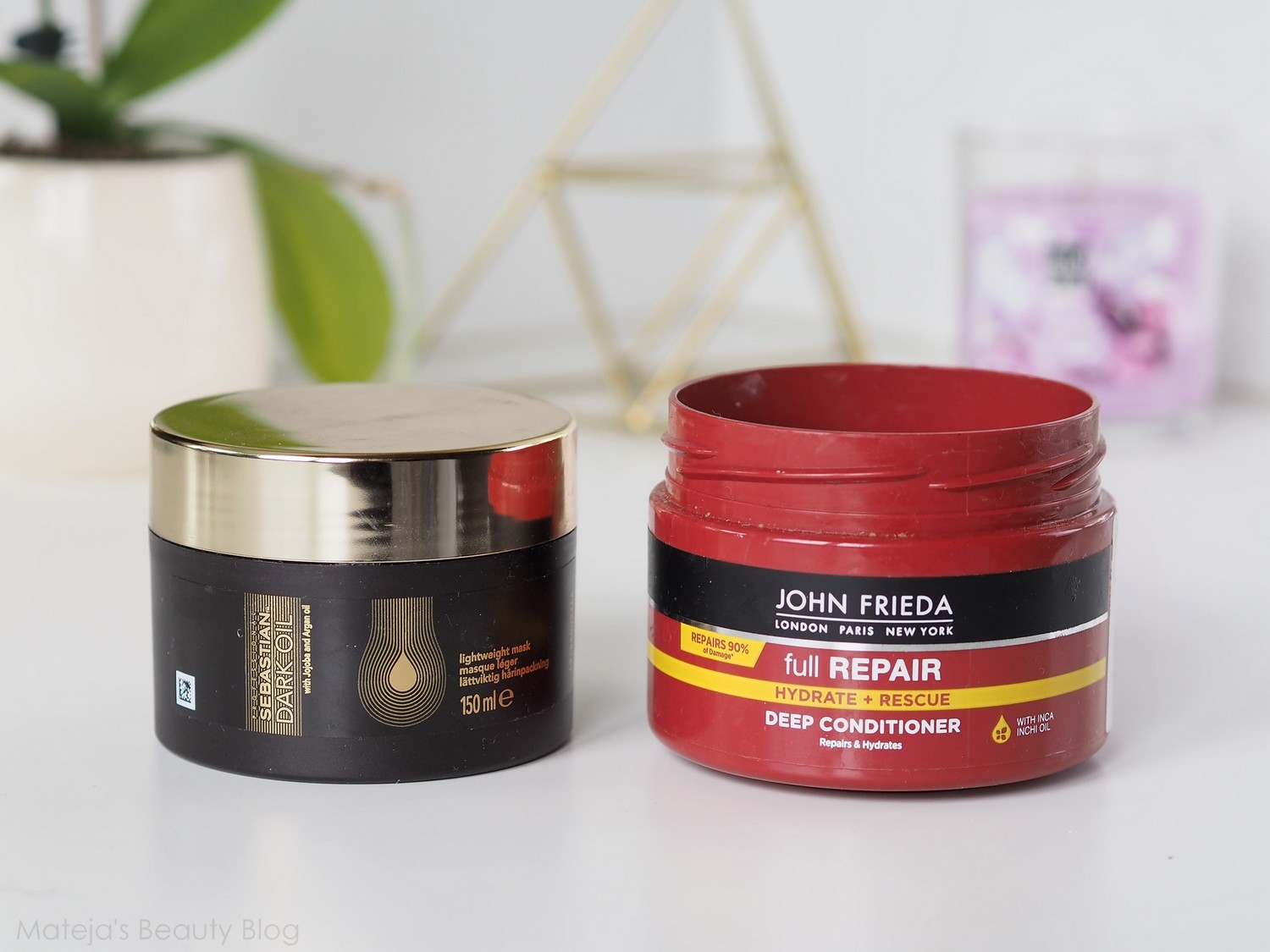 I got the oil and mask from this line because I was told it’s amazing for smoothing frizz. On its own those two don’t cut it, so I was disappointed when I first tried it, but when I combined it with my army of usual leave-ins, it smoothed my hair a lot more effectively. So now I like it and it’s nourishing enough for my dry hair despite the lightweight in the name, except it doesn’t keep my hair hydrated as long as other high-end/salon masks. It has a strong kind of incense scent, which I’m not too fond off, but it’s bearable and most reviewer’s praise it.

Great drugstore mask for taming frizz and making hair more sleek, but its nourishing effect doesn’t last long on my hair, which is typical for drugstore treatments.  I like anything that tames my hair, but I need to combine this with plenty of leave-ins. 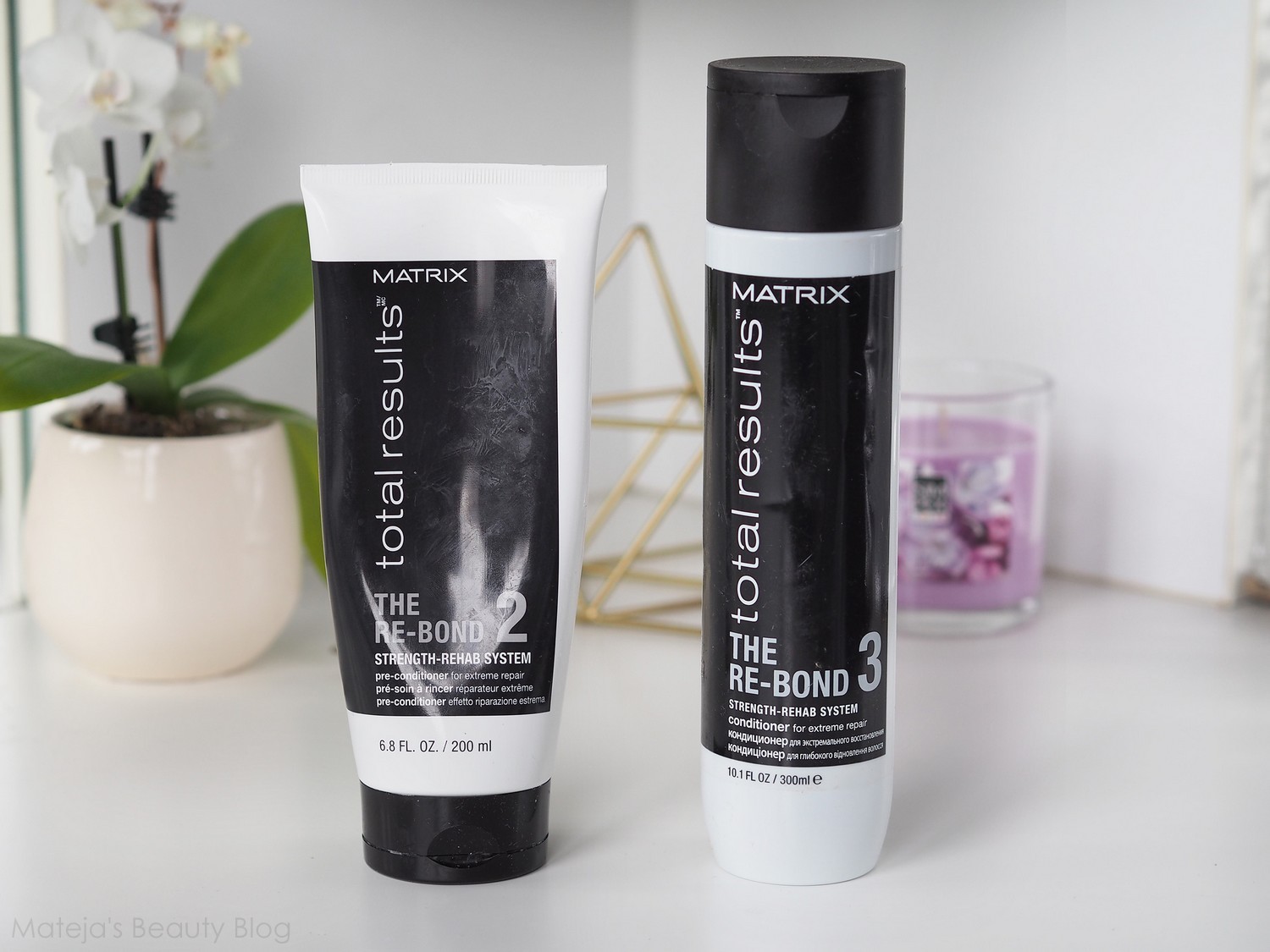 I always used these two together. It’s meant to be something like Olaplex, though it uses maleic acid (like in Kerastase Resistance Masque Extentioniste), but it’s not the same. Anyway, Matrix sadly discontinued this, but it was really good.

How 'We Are Lady Parts' Costumes Were an Avenue for Faith

Thu Jun 23 , 2022
“We Are Girl Parts” facilities on an all-female Muslim punk band who are generating audio their way, constructing an audience, and balancing their own everyday living on and off phase. Costume designer Personal computer Williams created each individual woman’s wardrobe to honor her romantic relationship with her faith whilst also […]